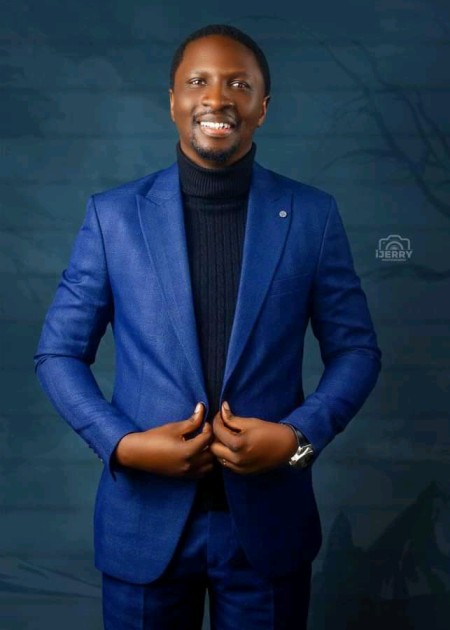 Have you heard of a great minister of the gospel called Apostle Andy Danauta? He is one of those preachers of the gospel who preaches the gospel with love and with the manifestation of God’s spirit. He is happily married and has two children. This article will reveal the beautiful life of God’s servant to you.

Andy Seth Danauta Kyarshik was Born 25th August In Kotoko Barracks in Kaduna North to Rev and Mrs Danauta Kyarshik, who hail from Mangu Local government of Plateau State. His father a military chaplain in the Nigerian Army moved a lot from state to state due to transfers and the young Andy accompanied him to most of the states he was posted to ,setting a foundation to one day become a Minister and preacher of the Gospel.

When he was about a year old, a white lecturer in the theological Seminary where his parents studied said “This boy will grow up to preach one day” and so it has come to pass..

He rounded up his Secondary education in 2005 in COCIN Head Quarters Compound Church school and immediately gained admission to the prestigious Federal University Of Jos, Plateau State, first as a Remedial Student. It was in this stage of his life that Apostle Andy Danauta had an Encounter with the Lord and surrendered his life to Jesus but before that, he wanted to become a Hip Hop rapper.

One year after his Remedial program he was placed in Botany Department graduating after four years with a B.Sc in Plant Science and Technology.

Apostle Andy Danauta got married to his beautiful wife, Pastor Chalya Danauta in 2015 and are blessed with two children a girl and a boy; Sophie Danauta and Andy Danauta Jnr.

After receiving the life of Christ in Remedial Department , Apostle Andy developed an uncommon passion for God and his kingdom and will soon prove to everyone his uncommon leadership gift.

As a result of his undeniable leadership gift and passion for God’s kingdom, in just his first year of being Born again, he got the highest nomination in his departmental fellowship to be President but was denied because of his age in the spirit and his inexperience; he will always say the people that denied him to become president in that level took the most wisest and spiritual decision because he was not ready to lead.

Instead of becoming President, Andy Danauta was appointed to head the welfare Department. In that same year he switched from Rap music to writing contemporary gospel songs and his songs began to get him some attention on campus. In his first degree year, Apostle Andy had an encounter where the Lord asked him to raise him a generation of True worshipers that understand Worship and Leadership. After discussing with a few friends, he decided to let the Vision tarry so he can grow himself to it, and so he waited for another year.

2nd May 2008 in a Vision Apostle Andy had ,he was standing in a vast endless field and it was as though the farmers had tilled the ground and planted seeds, he saw Pst E.A Adeboye call out to him on what seem to be the sun rising and He said “ Andy It is time to start The Inner Circle of God. He opened his eyes and took a pen and wrote the name, a name he never imagined or even thought about, infact he said he had to research to know the depth of the name.

Still not satisfied after much consultation with fathers , Apostle Andy was adviced to start with what he knew best which was Music, so on 25th Of June 2008; The Inner Circle of God Choir began on Campus with just 8 people comprising his friends and classmates. The Choir turned down invitations for a year just to study and pray, and Revival began to Burst forth for people will gather in rehearsals and pray and cry to the Lord for hours until people started asking if it was a prayer group or a choir.

Apostle Andy’s leadership grace began to rob off on every member that before one year, 99% of the members of the Choir became top leaders on campus and will eventually go on to lead the campus with Andy Danauta as the leader of one of the biggest faculty on campus then later a top 7 man executive team in Charge of the Entire fellowship on campus. His Influence began to grow the same year the choir started and he got his first official later to go preach in one of the biggest Departments on Campus, and not too long from that time many other fellowships on campus and off campus began to invite him over to go preach.

In 2012 while serving in Anambra state Apostle Andy Danauta had a one on one physical Encounter with the famous Apostle Arome Osayi and his Apostolic Ministry began after an impartation by the man of God. Apostle Andy Danauta turned down a job in Lagos State Nigeria after his NYSC to return to Jos as instructed by God.

On his Return to Jos he met his wife and began a Discipleship Ministry together. They got married 6th April 2015 and got into a period of waiting upon the Lord, then after 40days of fasting and prayers the new face of the ministry was born, Commissioned by Prophet Danlami Kalbasa, a son to late Benson Idahosa.

25th June 2015 was the birth of what is known today as The Inner Circle Of God Network or TICOG NETWORK. Apostle Andy Danauta believes strongly in discipleship as Gods technology for maturing the saints and has raised thousands of Disciples In and outside the country through his online and on-site dsicpleship school known as SCHOOL OF JESUS.

He is the founder and President of KABOD leadership institute based in Jos Nigeria and also the founder of Kingdom Network and The Inner Circle Network both dedicated to supporting and enhancing kingdom Music and values across the globe.

Apostle Andy Danauta has now become an author with the release of the book “Hijacking The Next Generation” making waves amongst young and old ministers of the Gospel. You can download the book Clicking Here

Apostle Andy Danauta is Currently based in Jos with his family and has been a major speaker in many conferences over the country. Apostle Andy has also caught the eyes of the media with several invites to radio stations and online journalist. He is truly a lover of God, His Kingdom and His people.

He is on social media as Apostle Andy Danauta Facebook,Instagram and Twitter.