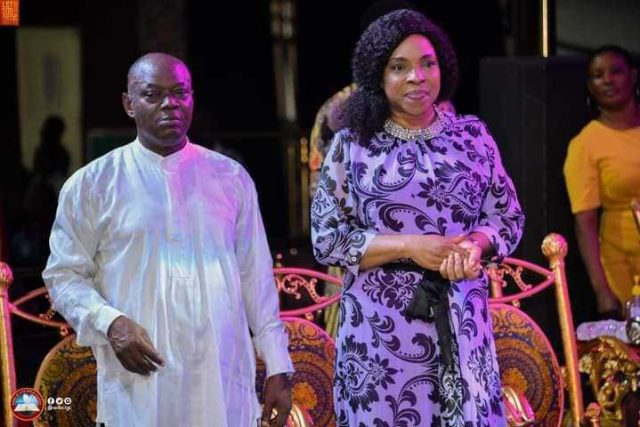 Veteran Nollywood actress Liz Benson Emeya has been trending on social media over a recent photo of her and her husband, Bishop Great Emeya.

The reports revealed the picture was taken at a church programme in Warri, Delta State, on Monday, August 10. Liz Benson is a veteran actress, television personality and philanthropist who started acting professionally in 1993.

She was born on 29th April 1966 in Etinawa Akwa Ibom state. She attended Sylvania State College in the United States of America, where she got a degree in Dramatic Arts. Liz Benson made it to the limelight after her role in Glamour Girls, released in 1994.

She left the movie industry unexpectedly in 1996, only to return years later as a born again Christian. She revealed she would only act in movies that aligned with her faith.

One of the most intriguing yet interesting part of Liz Benson is her personal life. The 54 years old actress has been involved in two marital relationships. 11 years ago in 2009, Liz Benson got married to a Bishop in a quiet court ceremony in Abuja.

Bishop Great Ameye was the second husband of the veteran actress after the death of her first husband. Liz Benson and her husband, Bishop Ameye both run a ministry called Freedom Family Assembly.

The evangelistic life of Liz Benson began after she made a come back into Nollywood. Recall that she once quit acting in 1996 and came back as a born again woman. In her early years of being in Nollywood, Liz Benson was often described as a hot actress considering the roles she was performing at the time.

But no she is living a happy and successful life with her Bishop husband.Liz Benson and her husband, Bishop Ameye: