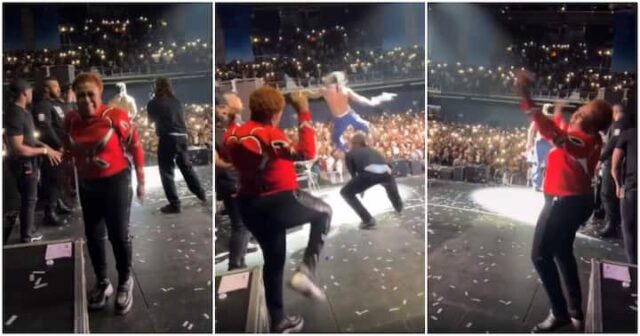 Grammy-award winner, Burna Boy’s mother, Bose Ogulu, has once again made fans gush on social media with her dance moves. The proud mother and manager of the top singer was seen dancing like a rockstar on stage during one of her son’s performances. While Burna Boy was thrilling the crowd with his energetic performance in Ireland, his mum was at one corner doing her thing to pleasure herself. She was killing Dem.

Burna’s mum has relentlessly supported her son. It is not strange to see Mama Burna dancing on stage whenever her son performs but this time around, she killing it with new swags.

Bose rocked a red sweater and black leather pants with sneakers as she moved energetically on stage to her son’s performance.

Being that she’s not a young woman, her dance moves impressed many watching her as she powerfully moves her body. Bose’s dancing was also captured on video and it went viral on social media. Watch Video Below