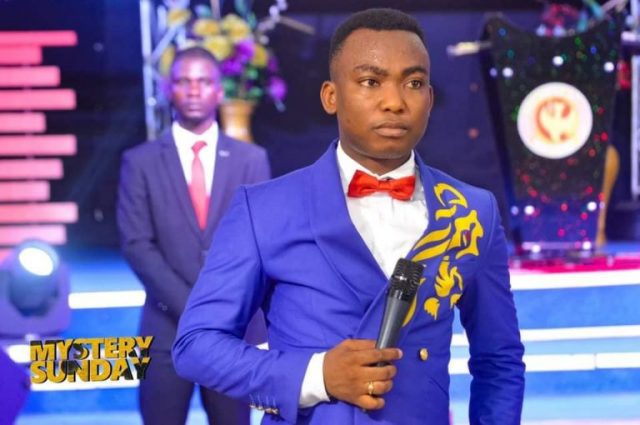 Evangelist Gospel Agochukwu has been preaching the gospel of Jesus since he was 6-years old. He was born in a scripture union crusade ground where the preacher named him “Gospel” and since then, preaching the gospel all over the world has been his ultimate goal. Continue reading to find out more about his early life story, encounters and mission as a preacher here on insidegistblog.

Evangelist Gospel Agochukwu has been in ministry since 2009 where he served as the resident pastor of St. Charles Methodist church Irete, Owerri West Imo state. That was where God gave him the vision to take the gospel to all nations – this vision gave birth to Shekina Arena Ministry and many more outreaches in different places like UK, Europe, North America, Asia, Africa and many more places around the globe.

Evangelist Gospel Agochukwu is a native of Awalla autonomous community in Isiekenesi, Ideato-South local government, Imo state. Born to the family of late Mr Boniface and Mrs Beatrice Ngozi Agochukwu. He is married to Mummy Faith Chidera-Gospel Agochukwu from Enugu state and the marriage is blessed with four children, three girls and one boy: Stephanie, Resurrection, Impact and Exploit (twins).

He studied Degree course Education English and literary studies at Alvan campus, university of Nigeria Nsukka, after which he did his post graduate studies in theology from which he was honored with a doctorate of a Divinity.

Evang. Gospel is a motivational speaker, an itinerant preacher, a good communicator known for his practical and dynamic teachings which has helped a lot of people apply the truth of the scripture in their everyday life.

He has preached the gospel in different countries of the world. He is a music minister, an author, he started writing since childhood, his first book was published in November 2004 and he has not stopped publishing books till date.

His life and spiritual legacy continue to draw many into deeper knowledge of God. He has made a great impact characterized by relentless and loving effort to physically and spiritually bless many while in relentless pursuit of God.

Gospel Agochukwu was born to the family of late Mr Boniface and Mrs Beatrice Ngozi Agochukwu, but his birth was a significant one. He was said to have been delivered in a Scripture Union crusade ground where the preacher named him “Gospel”. Since then, preaching the gospel to the ends of the earth has been his ultimate goal.

“I was given a church to pastor at Irete in my SS1 by a Methodist church. I would wear my school uniform, change at the back of the altar, mount the pulpit and minister to people. I didn’t know God was developing me for what is happening today”. – He recounted on his verified Facebook page.

Evangelist Gospel noted that it was via that experience that he recieved the vision to take the gospel to all nations of the earth.

He is married to Mummy Faith Chidera-Gospel Agochukwu from Enugu state, and the couple has four children: Stephanie, Resurrection, Impact, and Exploit (twins).

This commission is a prominent multi-ethnic Christian ministry established out of the vision God gave Evang. Gospel Agochukwu in October 2015. The official stone lying of Shekina Arena Ministry took place in January 2015 by His Eminence Dr. S.C.K. Uche.

The ministry is located at her permanent site No. 10 Akani street by Mbuogba market off NTAroad, Rumuokuta Porthacourt where it has more than three thousand seater capacity used for church services, reformation training, recreation and social programs.

The founder’s aim of establishing this interdenominational Christian center is out of God given vision to win more souls to the kingdom of God and to create a conducive environment where everyone can come and worship God with all sincerity in the beauty of his presence.

The ministry has grown to more than two thousand adult members. Known for their annual convention held yearly to mark their anniversary. The commission has three daughter churches in Eleme and in Omoku images phc.

He completed a degree course in education, English, and literary studies at the Alvan campus of the University of Nigeria Nsukka, following which he pursued post-graduate studies in theology, for which he was awarded a doctorate of divinity.

• Evang. Gospel is a motivational speaker, itinerant preacher, and good communicator noted for his practical and dramatic teachings that have helped many people use scriptural truth in their daily lives.

• He has preached the gospel in several parts of the world.

• He is a music minister and an author who began writing as a youngster.

• His first book was published in November 2004 and he has continued to write novels to this day.

• His life and spiritual legacy continue to bring many people into a closer relationship with God.

• He has had a significant influence because of his unwavering and compassionate attempts to physically and spiritually help many people while seeking God.

• This commission is a well-known multi-ethnic Christian ministry that arose from a vision God gave Evang. Gospel Agochukwu in October 2015. His Eminence Dr S.C.K. Uche laid the foundation stone for Shekina Arena Ministry in January 2015.

• The ministry’s permanent address is No. 10 Akani Street, near Mbuogba Market, off NTAroad in Rumuokuta, Port Harcourt. It has a capacity of over three thousand people and is utilized for church services, reformation training, amusement, and social programming.

• His goal in building this interdenominational Christian center is to win more souls to God’s kingdom and to provide a welcoming environment where everyone may come and worship God with sincerity in the beauty of his presence.

• His ministry has expanded to over 2,000 adult members. Known for their annual conference conducted every year to commemorate their anniversary. In Eleme and Omoku, the commission has three daughter churches.

Better to marry to late than marry wrong: Evang Dr. Gospel Agochukwu gifts wife car to mark her birthday and shares his story

Six days to my wedding, the girl I wanted to marry said she was no longer interested.Our ministry was barely a year old with exploits and I wanted to marry as well. The wedding date was fixed for 16th April, it was to hold at Methodist Church Nigeria Owerri Diocese Cathedral.

Wedding cards had circulated to family friends and church members. Our passports were at the embassy for our honeymoon, all the church workers had sewn uniforms for what I called ‘wedding of the century’. But she just called me with her mother’s phone and said she did not love me anymore.

I did all that was humanly possible to see if the wedding could hold because of the shame I felt will come with the cancellation but no I couldn’t. I underwent emotional brouhaha; psychological trauma. I nearly ran mad. But mercy said No!

We had never met before. You just chatted me on WhatsApp; with your own story which I cannot share here. We were 2 wounded people trying to heal each other. And that is what marital love is. Family Members said No; Friends said No but God said Yes and against all odds we married and it has been a smooth ride to destiny.

Our Home is a blessing to both families. And to the world at large. We have had 5 kids within 4 years of marriage. A broken relationship is better than a broken marriage. Better to marry late than marry wrong. God’s No is not a rejection but a redirection. Costly mistakes of Destiny is Delivered through painful and bitter experiences. Like the way injection and bitter drugs fight sickness in the body, that’s how some destiny destruction deliverance is.

Happy Birthday to my prayer partner and wife. We still have forever to Go. See photos