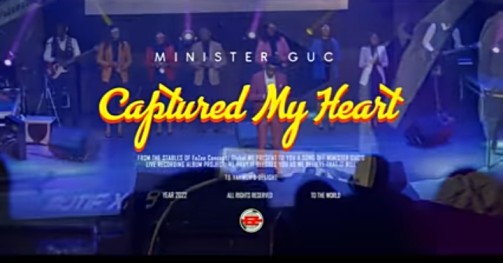 Meanwhile we can watch a preview of the song “Captured My Heart by GUC” moment his wife, Nene was recorded vibing to the song. Watch Video

This sound is coming after the birth of his first child with his wife, Nene and also after the release of Obinigwe, which is still buzzing around and climbing charts, published under EeZee Conceptz Records.This latest tune called, Captured My Heart is a lead single to Minister GUC’s forthcoming live album tagged, To Yahweh’s Delight. Enjoy below!

Gift Ugochi Christopher, who is professionally known as GUC is a gospel musician. He is known for the touching gospel music, All That Matter. GUC is one of the finest gospel music ministers in Nigeria, from Port-Harcourt. In 2019, he landed a record deal with EeZee Conceptz, the same music label with Mercy Chinwo, Judikay, and Chris Morgan.

Victoria Orenze – Nothing But The Blood