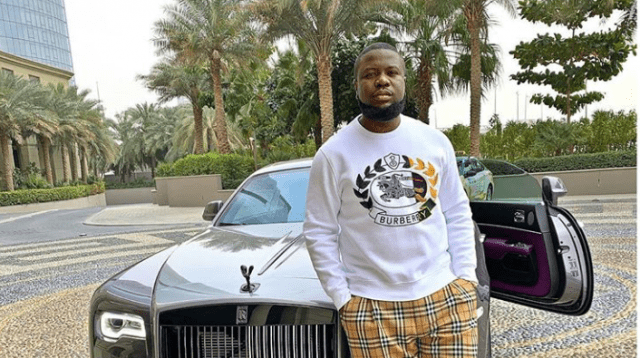 When is Hushpuppi release date?

According to the details on the website, which were verified by this paper, Mr Abbas (popularly known as Huspuppi) was released on July 20.

Responding to PREMIUM TIMES’s enquiry, his legal representative, Mr Pissetzky, said the bureau’s records showed ‘released’ because of his transfer to California. “These reports are not true. He has not been released. The Bureau of prisons website shows that he was released simply because he is being transferred now to California,” he said on Wednesday evening.

Mr Abbas’s case was transferred from Illinois to the Central District of California for prosecution, last Monday.

TRENDING: Watch video of Hushpuppi in prison hours after being sentenced to 11years in prison.

Ahead of the sentencing of Ramon Abbas, alias Hushpuppi, today, Monday, a United States court has received letters begging for mercy on behalf of the self-confessed international fraudster. Prominent among the letters of passionate appeal for mercy for Hushpuppi are those of his wife, Regina Manneh, and two Imams who wrote separately from Lagos and Borno states in the Nigeria’s South-west and North-east regions, respectively.

The letter by the Imam of Imisi-Oluwa Mosque, Lagos, Rasaq Olopede, described Hushpuppi as “a frequent donator” to the mosque.In another letter, Hudu Abdulrasak of Madrasatul Ahlul-Bait Islamiya, in Maiduguri, Borno State, also paid glowing tributes to Hushpuppi for his philanthropic gestures to the orphan, the widow and others in need.

They said the former Instagram celebrity, described by the US government as a proficient cyber-fraudster, had become remorseful and would be of good character after his release. The addresses of the authors, including Hushpuppi’s wife, are redacted in the copies of the letters obtained by PREMIUM TIMES on Monday.

The letters were filed at the US District Court for the Central District of California on 4 November in support of Huspuppi’s earlier plea for light sentence.

Forty-year-old Hushpuppi had personally sent a hand-written letter to the judge, Otis Wright, giving assurances that he was a changed person, and promising to make full restitution in excess of the benefits he derived from the crimes, to the victims.

Charges, guilty plea, appeals for mercyHushpuppi was arrested in Dubai, the United Arab Emirates, and flown to the United States in June 2020 to face charges of multi-million dollars fraudulent schemes including “bank cyber-heists”.

US authorities said Hushpuppi and his conspirators, through an extensive cyber-fraud, targeted multiple victims, including a bank in Malta, a law firm in New York, two companies in the United Kingdom, and a businessperson in Qatar.

Hushpuppi, who initially denied the charges, made a turnaround to enter into a plea bargain agreement with the US authorities in July 2021, in the hope of getting a light sentence. He confessed to conspiring with multiple persons within and outside the US to launder the proceeds of the fraudulent scheme perpetrated against persons and businesses in different countries.

The offence ordinarily attracts a maximum sentence of 20 years in federal prison, among other punishments including full restitutionThe US government, in its pre-sentencing filings, pushed for at least 11 years jail term for him.

But, in his plea for leniency, Hushpuppi, without suggesting any number of years of jail term to the judge, pleaded for a sentence “to a term of imprisonment below the calculated range dictated by statute.” The court has since received a flurry of letters addressed to the judge from Hushpuppi’s family and religious circles, also pleading for mercy on his behalf.

In her undated letter pleading for mercy on behalf of her husband, Regina Manneh, who is the mother of Hushpuppi’s youngest child, said his absence from home had left a void in the family.

Ms Manneh is believed to have lived with Hushpuppi and their son, Raymond, in Dubai. Hushpuppi’s two older children lives with their separate mothers in the US and the United Kingdom (UK).

Ms Manneh said she and her four-year-old son were on a visit to see relatives in Sweden when Hushpuppi was arrested in June 2020. “When I heard about his arrest, my son and I were in Sweden visiting family.

Unfortunately, there was a lockdown due to Covid and before we got back to Dubai, he was already extradited to the USA so there was no chance for Raymond to see his father,” she wrote. In her impassioned letter which is suspected to have been sent to the judge in October, she described Hushpuppi as “a very active father” with whom his son spent a lot of time going out and doing activities, including watching movies.

Hushpuppi’s incarceration, she said, “has had a huge impact on us as a family but mostly on our 4year-old son.”Ms Manneh, who said she had been heart-broken by the turn of events, noted that Raymond “constantly asks for his father’s whereabouts.”

“As a mother, this breaks my heart for my son because he is at an age where he is aware of things and that his father is not with him physically.” She said whenever Raymond had the opportunity to video call his father, “he constantly asks his father if he is on the way”.

“Usually after the call ends, Raymond gets emotional and just hugs me. And all I can do is offer emotional support to my son that is struggling to navigate his feelings during these hard times,” the mother said.

She said her plea for mercy for Hushpuppi was not just for herself, but “for my son and his family”. She said Hushpuppi’s whole family depended on him financially and emotionally.

“Not having Ramon here has left a void in Raymond which saddens me,” she said. She said she had had to start working overtime “in order to be able to pay for our child’s private school fees and his needs which has been a challenging task.”

“Ramon is a man that loves his family and would do anything for them. He is not perfect, but he is a good man that has made mistakes and he has taken responsibility. I beg this court to have mercy on him not only for me but for his children,” she wrote.

Two Islamic clerics in their separate letters painted a portrait of Hushpuppi as a kind, loving, and generous man, whose criminal conduct alleged in the charges levelled against him, came to them as a rude shock.

Mr Olopede of Madrasat Ridwanu L’Hai-L-Arobiyat Wal Islamiyat, Imisi-Oluwa Mosque, said in his 8 October letter that he had known Hushpuppi for 15 years as a frequent donator to the mosque.

In his separate letter dated 4 October, Mr Abdulrasak of the Madrasatul Ahlul-Basit Islamiya, in Maiduguri Borno State, described Hushpuppi as a true philanthropist, although the cleric did not indicate how long he had known him. Hushpuppi, a Muslim, was born and raised in Lagos before his sojourn to Malaysia and then to Dubai, in the United Arab Emirate (UAE), where he was arrested and flown to the US in June 2020.

His possible connection to the Lagos mosque is therefore understandable.But his account of his personal history detailed in his court filings gave no hint of how he might have been connected to the Maiduguri community, in Borno State. Yet, Mr Abdulrasak said Hushpuppi was known to his congregation in Maiduguri as a man that had lent “hands of assistance to many in our community”.

Among Hushpuppi’s philanthropic gestures, according to the cleric, included provision of borehole and water well, payment of school fees, feeding programmes, and rendering assistance to the needy, widows and orphans “on several occasions”.

“We hereby plead and pray to your honour to kindly put the above stated into consideration when tempering justice,” he wrote. Also attesting to Hushpupi’s kind-heartedness that he was known for in the Lagos mosque, Mr Olopede said the defendant “made himself a willing and available example of hard work and humility for teenagers in his immediate neighbourhood”.

He said the defendant provided leadership and mentorship to friends and older adults alike, even as he sought direction for his own life. “Ramon would usually contribute his part to anything that concerns the mosque, he would offer financial support at every given time when the mosque was holding events,” the cleric wrote.

He said Hushpuppi had at different times, donated to the mosque and bought a generator for the mosque. He added that Hushpuppi’s involvement in criminal activities “came as a rude shock.” “It was surprising that a promising young individual with a tremendous attitude towards work could be doing anything shady,” he added.

The cleric said he understood “the enormity of the crime” Hushpuppi committed, but called on the judge “to evoke the emotional part of you and beg that you temper justice with mercy.” He noted that he had been informed of how Hushpuppi had been “cooperative and well-behaved” during this trial.

“I hope the remorse he has shown in the last years makes it a worthy recourse to getting a reduced sentence,” he added.

1. How long was Hushpuppi given?

The U.S. government wants Ramon Abbas, aka Hushpuppi, who pleaded guilty to conspiracy to engage in money laundering in July 2021, jailed for 135 months.

2. Where is Hushpuppi now today?

Hushpuppi, 37, was arrested in the United Arab Emirates in 2020 for crimes that cost victims almost $24m and is currently in a US jail awaiting sentencing having pleaded guilty to money laundering.