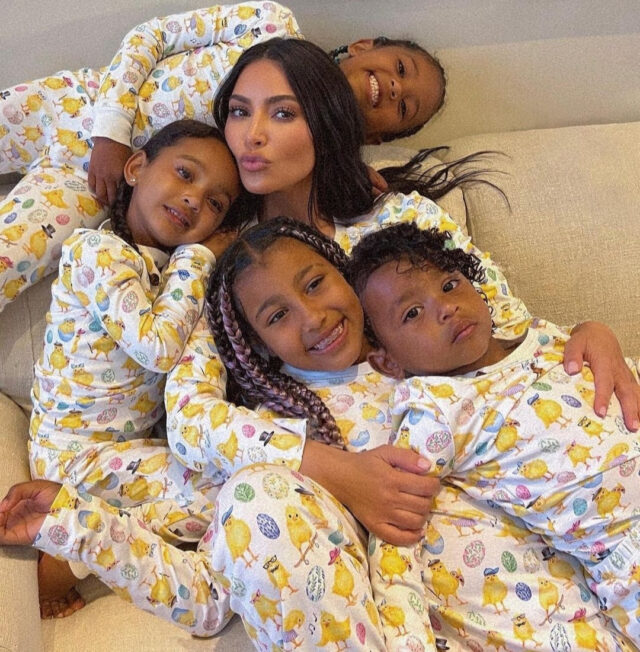 Reality star, Kim Kardashian has released a photo of herself and let kids taken over the Easter holiday. The reality star posed with her 4 kids in matching pyjamas and she shared the photo on Instagram.

“Easter with my bb’s,” she captioned the adorable photo.

Kim Kardashian and Kanye West’s first baby, North West, was born on 15th June 2013 and she is the eldest of their four children. She is sister to Saint, Chicago and Psalm West and is cousins with the rest of the next generation of the Kardashians.

Kim Kardashian and Kanye West’s eldest son was born on 5th December 2015 and is the couple’s second oldest child.

Kim and Kanye’s youngest daughter, Chicago, was born on 15th January 2018 and is the one of two of their children that was carried by a surrogate rather than Kim, after she suffered with placenta accreta during her previous two pregnancies and was advised by doctors not to try and carry another child herself.

The youngest addition to the Kardashian clan is Kim and Kanye’s fourth baby, a boy, named Psalm, after the bible, who was born via surrogate on 10th May 2019. The family flew over to the Kardashian’s native country of Armenia to have him baptised, along with his siblings, Chicago, Saint and North.