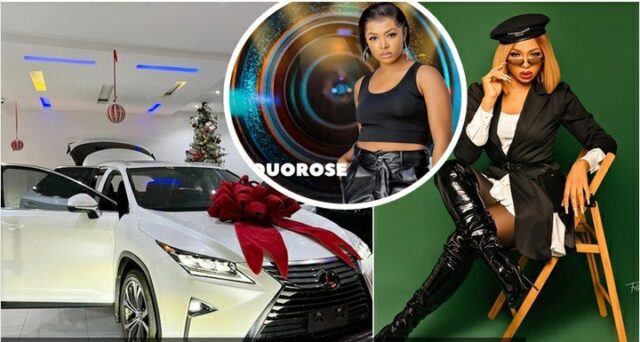 Liquorose, also known as Roseline Omokhoa Afije, was born in 1995 and is a Shine Ya Eye competitor on Big Brother Naija season 6. Liquorose is a multitalented woman who is a choreographer, entertainer, model, and video vixen from Nigeria.

It would be interesting to learn more about the talented Liquorose, who frequently acts and dresses tomboyishly and characterizes herself as “a down-to-earth go-getter.” Everything you need to know about Liquorose’s life to date is included in this article. As she competes for the 90 million NGN grand prize in the sixth season of BBN.

Liquorose was born on March 31, 1995, to Mr. and Mrs. Omokhoa. Although she was born in Lagos State, Nigeria, her home state is Edi State. She attended Itire Nursery and Primary School and Del International College in Ijeshatedo, Surulere, Lagos State, Nigeria, for her primary and secondary schooling, respectively. The 26-year-old Liquorose continued to live in the Lagos area after graduating from the University of Lagos.

the Nigerian-born Early on, Liquorose recognized her love for and talent for the entertainment business, and she didn’t hesitate to pursue it. Liquorose, who is 26 years old, has made greater advancements and received more notoriety recently. But she credits her perseverance and hard work for this.

Her appearance in the popular, award-winning Nigerian TV drama series The Johnsons in 2012 brought attention to her acting abilities. She appeared in the 2015 film “The OAP” and the 2016 short “HEX” before that.

When Liquorose was artistically featured as a video vixen in Chop Am by Reekado Banks, Yo Yo by Selebobo, Oh Oh by Runtown, and Jalla by xcellente featuring Solid Star, her fame increased even further.

Liquorose tried out dancing, one of her other skills. She shared footage of her dancing tricks in various social networks until Nigerian music video producer Clarence Peters spotted her and forced her to collaborate with E4ma and Ellaley in one of his videos. The trio- E4ma, Ellaley, and Liquorose later went on to create a unique dance group they called Girls Gone Bold aka GGB Dance Crew.

Liquorose’s skill as a dancer with the GGB Dance Crew actually extended beyond the local scene; she and the rest of her group have appeared in the music videos of well-known international musicians including Diamond Platnumz, Vanessa Mdee, Casanova, Victoria Kimani, Stoneboy, Emmy Gee, Prezzo, and Jaguar.

Due to her notoriety and evident talent, Liquorose has completed numerous large-scale projects and even performed at important events including the Headies Award, Skales album release, MOTY on June 26, 2016, Gidi Fest, Falz industry night on November 18, 2016, and Project Fame.

10 Things You Need To Know About Liquorose

▪︎Liquorose loves to meet new people, but she doesn’t get along easily with people who talk too much.
▪︎She is a “a down-to-earth go-getter”
▪︎Liquorose enjoys singing, cooking, reading and writing.
▪︎Liquorose is tomboyish, but can glam up when she needs to.
▪︎Liquorose enjoys travelling.
▪︎She likes temporary tattoos.
▪︎Her preferred hairstyles are low-cut, afro and sometimes she wears a weave.
▪︎She was a former video vixen.
▪︎She is one of the housemates for the 2021 Big Brother Naija season 6.
▪︎She is the leader of a girl dance group, GGB Dance Crew which has talented dancers like E4ma, and Ellaley as members.

A large portion of Liquorose’s earnings come from her work as a dancer, fashion designer, model, and video vixen. Her estimated net worth ranges from $50,000 to $70,000.

In Lagos, Nigeria, resides Liquorose. She doesn’t advertise any of her own homes on social media.

Liquorose started the year off on a positive note by posting pictures of her white 2018 LEXUS RX350. The BBNaija finalist in 2021, Liquorose gave God all the glory for blessing her with a gift that was far beyond her expectations. Many Nigerians flooded her comment section with messages of support as they spread love.

Liquorose is believed to be 100% single at the time of joining The Big Brother Naija.

What is Liquorose Social Media Handles