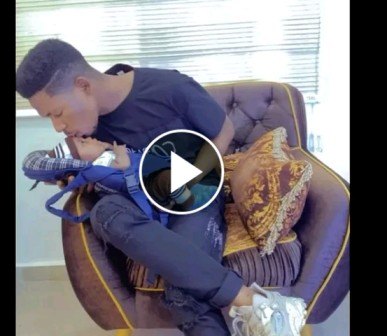 Moses Bliss welcomes baby boy, names him Bliss. It’s always fun to have babies around you because they’re lovely and are precious gifts from God. Watch moment when Moses Bliss announce arrival of his sister’s son. He also reveals that the baby boy is called Bliss. Watch video below

Moses Bliss made this revelation recently on Facebook and this has actually got fans talking. Is Moses Bliss Married? Is Moses Bliss having a baby mama? Well, we has an answer to that, contained in this article.

So when my Sis was pregnant with this baby, I prophesied it is a baby boy and yes it is a baby boy! The 2 months old was brought to my office today and to my surprise they named him after me “Bliss”😊 he also bears my dialect name “Etiido”. Guys meet my name sake; a bundle of Joy, this beautiful baby boy; Bliss🥰

Recall that Moses Bliss went viral after the release of his album, TOO FAITHFUL. It now has over 21million views on YouTube. Watch video: