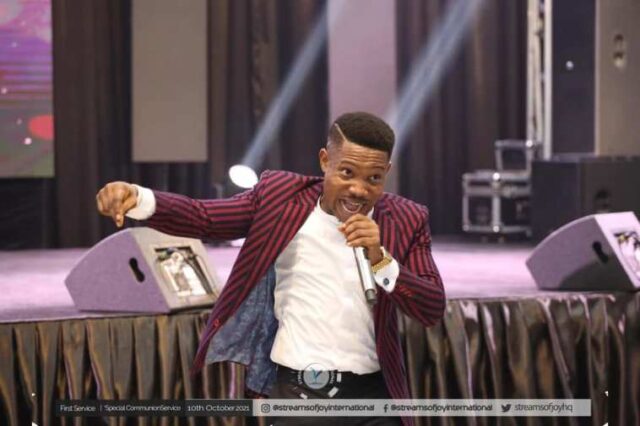 Jerry Uchechukwu Eze popularly known as Pastor Jerry Eze, is a Spirit filled Seasoned Pastor, Passionate Teacher of the Word of God and the Founder and President of the fast-growing Ministry ‘Streams Of Joy International.’

Jerry Uchechukwu Eze is the Founder and President of the fast-growing Streams of Joy International. A seasoned Pastor and leader, a consummate conference speaker and leadership coach. His work as a minister has afford him the privilege to minister to so many people on major platforms around the world.

How old is Pastor Jerry Eze

Jerry Eze Jerry attended Ibeku High School in the city of Umuahia for his secondary education and later went to Abia State University (ABSU) where he graduated with a degree in History and International Relations (HIR).

Jerry also has an M.Sc in Human Resource Management.

After his graduation from ABSU, Jerry spent sometime working in a broadcasting network and later worked with the United Nations and the World Bank Project from where he resigned by God’s instruction in 2009, and went fully into Christian Ministry.

Pastor Jerry knew he had a calling into the ministry at a tender age and that has contributed much to his present success in ministry. While in Abia state university, Jerry Eze became the president of the school Chapel, All Saints Chapel.

In 2011, by the leading of the Holy Spirit, PJ started the Streams of Joy Devotional, which is a devotional for glorious Christian living, and it has made its way to over 5 continents of the world with testimonies of its impact in lives too numerous to mention. He has also authored several other books.

A passionate God-lover, Pastor Jerry is married to Pastor Eno Jerry who has been very supportive to his ministry, and they are blessed with lovely daughter Samara and a son Jerry.

Who is Pastor Eno Jerry Eze?

Pastor Eno Jerry Eze, is the wife of famous clergyman, Pastor Jerry Eze. She is a Nigerian author, the resident Pastor of the Refreshing Point, an expression of Streams of Joy International Church, a Lecturer at Michael Okpara University of Agriculture, Umudike, Umuahia, Abia State, the CEO/MD, Lead Consultant at Jeno Consulting.

My job almost ruin my marriage, Pastor Jerry Eze breaks down as he recounts difficult times

Pastor Jerry Eze has recounted how his job as a priest nearly ruined his marriage to his wife, Eno Jerry. In an interview with Chude Jideonwo, Eze, who broke down in tears, stated that he struggled to strike a balance between his ministering job as a pastor and a spouse throughout the time of his marital crisis.

The preacher noted that his wife understood his true nature after she came full circle.He said, “My wife and I had our own illumination season, so to speak. If you read her book “I Almost Ruined My Marriage,” she needed to see the pastor in me, not necessarily her husband, during those turbulent times.

“I didn’t realise why God was causing me to be in that place of being moulded by her actions. Being a true Christian by her,” he said.

Eze said, “I mean, things were not going too well, and I was still in that place where I was trying to be the great spouse…when she came full circle, she realised that, beyond this supernatural and manifestation, this man is a true Christian. Like, this is what it is. And that it’s not acting.

“I’m sincerely in that place where all that I desire, with all the growing numbers, is that Jesus be pleased,” he added. Eze is popular for his YouTube live streaming fervently praying over thousands of stacks of requests he has received from his followers around the world every morning at 7am Nigerian time.

Eze’s passionate prayers are delivered in an urgent staccato, as he prays for cures to ailments and challenges such as illnesses, court cases, and financial issues. The cleric preaches miracle healings and he popularised the slogan “What God cannot do does not exist.”

His preachings are circulated through live broadcast, cuts to pre-recorded videos from his followers sharing testimonies and results of his prayers. The testimonies range from healings from terminal illnesses to conception after years of infertility.

Eze describes the testimonies as the “strange acts of God,’ saying “It’s way beyond science and technology.”

Pastor Jerry Uchechukwu’s income details are not made public but he leads a fast-growing church. His net worth has not been estimated. He lives a simple life and doesn’t give many details on his social media pages. However, if conjectures are anything to go by, his net worth should be around $100,000.