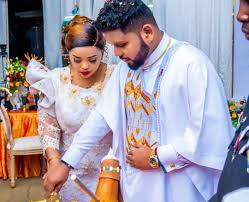 Rev Lucy Natasha is a renown city preacher who has been on the Lame Light for the past few decades. Natasha who used to preach online on Facebook Live and Instagram Live has now launched her church. The preacher has been preaching the Gospel Internationally, this includes Nigeria, Uganda, and South Africa. Rev Lucy Natasha is also an author of several Christian books.

She is a Kenyan by Birth.

Lucy Natasha was born on July 23rd, 1992. Natasha is 29 years old now. The gorgeous Preacher was born in Huruma, Eastland estate, Nairobi Kenya. Natasha is approximately 80 Kilograms in weight and about 5.2 Ft Tall.

She is a pastor by profession and has accrued a huge amount of wealth through donations. The preacher does not operate any other known Business despite driving expensive cars and living a flamboyant life.

Reverend Lucy Natasha met her husband Prophet Carmel back in 2020 but she introduced her to the social media family later in 2021. The two lovebirds got married in a traditional wedding on January 22, 2022. Prophet Carmel in an interview revealed he first saw Natasha in a video preaching.

The Canadian-based Indian explained how he inboxed her lover who never responded but later gave in after a few months.

What is Rev Lucy Natasha’s Net Worth?

According to some sources, the gorgeous preacher is estimated to be worth about USD 5.5 Million. This is Equivalent to Ksh 600 Million. Natasha owns a private Jet and 6 high-end Vehicles.

Lucy Natasha seems to be among the rare gospel preachers with tattoos. This was first spotted by her followers after she was spotted wearing a hot pair of shorts. This made many of her followers raise questions and concerns regarding whether she is really born again.

Rev. Natasha Reveals How She Met Husband Prophet Carmel: ‘He Slid Into My Instagram DM

“Our relationship started in a very interesting way because he sent me a DM…he slid in the Instagram DM. Our meeting together was heavenly and divinely orchestrated,” said Rev. Natasha in an interview with Lynn Ngugi posted on YouTube.

Prophet Carmel, who was also present during the interview, explained that he first saw Rev. Natasha in a video while he was on assignment and was immediately hit by a spark.

The Canadian-based prophet decided that come what may, he needed to contact the preacher, even if via social media.“I was invited to preach in a place, the lady in the house showed me a video where my love was preaching, I saw the video and there was a spark in me.

I said, at any cost, I need to slide into the DM,” he said.Initially, Rev. Natasha did not reply but the persistent Prophet Carmel did not give up.“It was like I was talking to myself but I did not lose hope,,” he stated.Rev. Natasha admitted that she was impressed by his tenacity and resilience to keep sending the messages despite the silence from her side.

Prophet Carmel, on why he fell in love with Rev. Natasha, said: “I see a strong woman in her, with a compassionate heart. I said this is a woman of God, she’s an example, and I need to connect with her.”The two lovebirds got married in a traditional ceremony sometime in January, 2022.”

Love is a sweet thing, when you find your better half, the days are filled with joy, happiness and fulfilment. Happy moments during our traditional wedding,” Rev. Natasha wrote while sharing photos of their celebration.