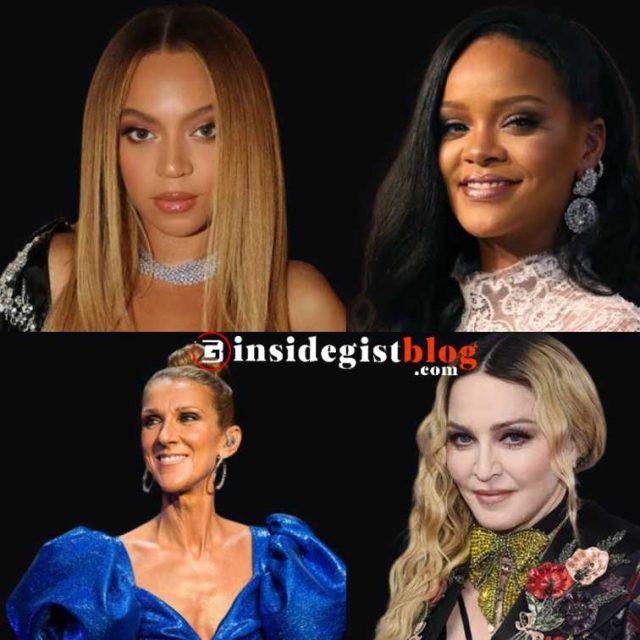 The music business is fortunate to have a large number of female performers who continue to break through barriers and have a significant impact both on and off the stage. These musicians have developed their careers outside the music industry, creating empires and accumulating fortunes that are unattainable to the average person. We’ve put together a list of the top 10 richest female vocalists in the world as of 2022 to honor these Amazon.

At 33, Rihanna earns $1.7 billion, making her the richest female musician in the world.

The world’s richest female artist in 2022 is the sensational American-Barbadian diva Rihanna. With an estimated net worth of $1.7 billion, the 33-year-old musician, Forbes reports that she made a significant portion of her money through her lingerie and cosmetics brands Savage x Fenty and Fenty Beauty.

The second richest black lady in the world, behind Oprah Winfrey, is Rihanna, one of the wealthiest musicians in the world. Before starting her business, Rihanna was one of the highest-paid celebrities in the previous ten years. With more than 250 million recordings sold globally, she is also one of the best-selling musicians of all time.

She has also won six Guinness World Records, nine Grammy Awards, thirteen American Music Awards, twelve Billboard Music Awards, and the NAACP President’s Award. She was ranked among the 100 most influential individuals in the world by 2017 and 2018.

On the top 10 list of the wealthiest female singers in the world in 2022, Madonna, the stylish Queen of Pop, comes in at number two with an estimated net worth of $850 million. The 63-year-old singer also works as an actor, and she owns Maverick Records as well as a number of fashion and health clubs.

With more than 300 million records sold worldwide, Maddona is one of the most well-known and influential figures in popular culture. She is also one of the best-selling musicians of all time. She continues to be the highest-grossing solo touring artist of all time, with concert ticket sales totaling more over $1.5 billion.

Additionally, she has had the most solo success in the history of the Billboard Hot 100 in the United States She holds the record for the most female artists’ number-one singles in Australia, Canada, Italy, Spain, and the UK. The actress who won the Golden Globe also won accolades from the Grammys, American Music Award, and Brit Awards.

According to Forbes, Canadian singer Celine Dion, 53, ranks third among the richest female singers in the world with an estimated net worth of $800 million (2022). Celine, the best-selling Canadian artist of all time and the richest musician in Canada, started her career at the age of five by singing at her brother’s wedding.

She rose to fame as a teenager in Canada during the 1980s with a number of French-language records, and she later won the 1982 Yamaha World Popular Song Festival and the 1988 Eurovision Song Contest, which helped her earn international notoriety.

Dolly Parton’s claim that her breasts were insured for $600,000 is untrue.

With an estimated net worth of $650,000, Dolly Parton makes the list of the richest female singers in the world in 2022. One of the finest figures to ever grace the American entertainment world is the iconic country singer. Dolly has sold more than 100 million copies of her 47 solo albums and more than 3,000 songs globally.

She is a businesswoman and an actress in addition to her career in the music industry. She is a co-owner of The Dollywood Company, which operates a number of amusement parks and dinner theaters in addition to the Dollywood theme park and Splash Country water park.

13 was the age of my first vocal damage, said Beyonce

Beyonce, a legendary American singer, ranks fifth among the richest female singers in the world in 2022 with a net worth of $500 million. The 40-year-old, who holds the record for receiving the most Grammy awards for a female artist, started her musical journey as a member of Destiny Child, one of the most successful girl groups of all time.

Beyoncé has won more awards than any other performer, including 28 Grammys, 26 MTV Video Music Awards, 24 NAACP Image Awards, 31 BET Awards, and 17 Soul Train Music Awards. She was considered by Billboard and the RIAA as the best female artist of the decade.

Gloria Estefan, a singer and businesswoman of Cuban and American descent, will rank sixth among the richest female singers in the world in 2022 with an estimated net worth of $450 million. She began her singing career as the frontwoman for the band Miami Latin Boys, which eventually changed its name to Miami Sound Machine.

Gloria is credited for breaking down boundaries for Latin music in the international market and providing opportunities for a number of other Latin musicians, including Shakira, J.Lo, Ricky Martin, and Selena. She is one of the best-selling female vocalists of all time with global record sales of over 75 million copies.

She holds three Grammy Awards, as well as stars on the Hollywood and Las Vegas Walks of Fame. She was awarded the Presidential Medal of Freedom in 2015 for her contributions to American music, and in December 2017, she was honored by the Kennedy Center for her work with American Culture Life.

With an estimated net worth of $450 Million, another iconic Canadian singer, Shania Twain, joins the list of the richest female singers in the world in 2022. The 56-year-old singer is regarded as one of the most well-known country performers of all time and the best-selling female artist in the history of the genre.

At the age of 8, Twain started her musical career by singing in bars to support her family’s expenses. She started singing professionally in 1990 and released her debut studio album in 1993 after being asked to perform on a TV show at the age of 13.

With the release of her second studio album, (Woman in Me), in 1995, which sold over 20 million copies globally, she rose to prominence on a global scale.

She has won more than 200 accolades, including five Grammys.

With an estimated net worth of $450 Million, English singer and Spice Girls member Victoria Beckham makes the list of the top 10 richest female singers in the world in 2022. The 48-year-old retired vocalist is now a well-known fashion designer and style icon around the world.

Victoria started her career as a member of the Spice Girls, the all-time best-selling female band. Having a global record sales of over 80 million records. Before launching into fashion and entrepreneurship, she also went it alone.

She established her namesake label in 2008 as a fashion icon, and it has since become one of the most well-known with a devoted following in the United States. The Victoria Beckham label was voted the year’s top designer brand in the UK in 2011. In addition, she received an OBE for her contributions to the fashion business in the 2017 New Year’s Honours.

With an estimated net worth of $410 million, according to Forbes, American singer and actress Barbra Streisand will rank among the top female vocalists in the world in 2022. One of the most popular entertainers in the country, she is also one of the few to have won an Emmy, Grammy, Oscar, and Tony (EGOT).

With more than 150 million records sold globally, Barbra is one of the most successful recording artists ever. With 68.5 million certified album units, she is also the second-highest certified female artist in the United States, according to the Recording Industry Association of America (RIAA),

The best performer in the country is Streisand, who started her career in the early 1960s by appearing in nightclubs and Broadway theaters. She has won nine Golden Globes, the Presidential Medal of Freedom, four Peabody Awards, two Oscars, and ten Grammy Awards.

Jennifer Lopez, popularly referred to as J’Lo, comes in as number one on the list of the wealthiest female singers in the world in 2022. The American actress, singer, and dancer is thought to be worth $400 million. In a 1991 American comedy series, she made her acting debut as a dancer.

She entered the music business in 1999 with her debut studio album On the 6, which contributed to the growth of the Latin pop genre in American music. Jennifer Lopez has run a number of businesses in addition to the entertainment industry, including a production firm, a clothing and beauty brand, and fragrances.

She is regarded as the most important Latin artist in America with combined film earnings of US$3.1 billion and estimated global record sales of 70 million. She has won various honors, such as a prestigious star on the Hollywood Walk of Fame, the Billboard Icon Award, and the Michael Jackson Video Vanguard Award.

Here is a list of the top 10 highest-paid female singers in the world as of 2022, along with an estimate of their respective net worth from Forbes.