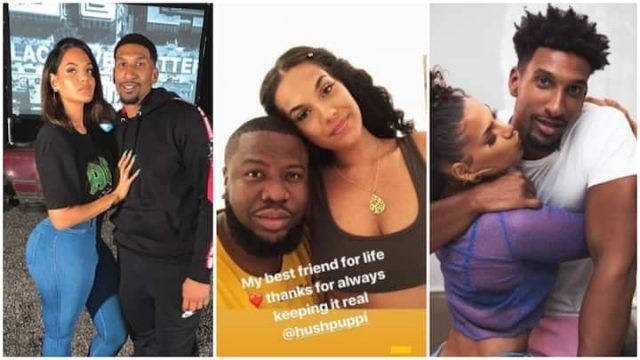 Amirah Dyme has taken to social media to show off her new man – Dyme who was to believed be Hushpuppi’s girlfriend, had some months ago, shaded him shortly his arrest – In a recent post on Instagram, she posted photos of her new boyfriend

In a new Instagram post, Dyme showed off her new man in a series of photos and judging by the photos, she sure has eyes for only the good stuff!

Recall only some months ago, the Instagram celebrity threw shade at Hushpuppi after his arrest. The gorgeous lady took to her Instagram stories to share her opinion on the arrest of her lover for fraud.

Speaking about the big spender’s attitude to other people, Amirah claimed that Hushpuppi looks down on those that he thinks are not good enough because they are not making as much money as him.

According to her, these people are those who work for their money. Narrating further, she noted that even though he knew he was living on stolen funds, it never really stopped him from looking down on others

Meanwhile, The lawyer representing Ramon Abbass (Hushpuppi), Gal Pissetzky of Pissetzky and Berliner, has argued that the popular Instagram star is not guilty of the fraud charge brought against him.

In an interview with Forbes, the lawyer said that the Nigerian has a legal business that he runs which is the source of his income. Recall that over 10 days after the arrest of Ray Hushpuppi, the police in Dubai finally released a video clip that captured the operation that led to the alleged internet fraudster’s arrest.

Amirah Dyme was already an Instagram model before Hushpuppi’s arrest in June 2020, but her spat with him boosted her social media presence. Recently she shared a photo of her baby bump on her verified Instagram account with over 3.8 million followers, and a lot of her fans congratulated her.