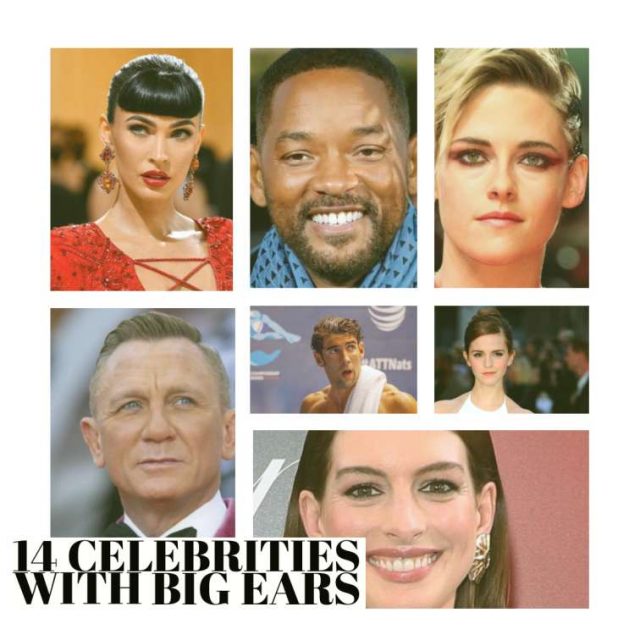 Today, we bring to you 14 Actors with big Ears. It’s usually not too hard to spot some ‘body abnormalities’ in people mostly when it’s within the exposed parts of their body. There’s just one thing that makes you unique from another person, even identical twins are different.

God made it such that you can’t see a perfect person without you having to complain or spot differences in them, each of us has individual characteristics. Some people perceive their nose, lips, or hair as something they should be hiding from the public, like it’s a disease.

Others believe that their ears are too large or irregular in shape. Still, if you think about it, everyone’s ears are weird because they’re all unique, so go ahead and crush that inferiority complex as even celebrities have these insecurities. Below are 14 famous people having big ears and are still proud of themselves.

Kristen Jaymes Stewart is an American actress. The world’s highest-paid actress in 2012, she has received various accolades, including a British Academy Film Award and a César Award, in addition to nominations for an Academy Award and a Golden Globe Award.

Our favorite vampire enthusiast does not have any issues with her lovely ears, she made it to the top of our list as one of the Actors with a big ears.

Willard Carroll Smith II, also known by his stage name The Fresh Prince, is an American actor, rapper, and producer. He began his career starring as a fictionalized version of himself on the NBC sitcom The Fresh Prince of Bel-Air.

Will is the kind of a guy who would emphasize his flaws just to make people laugh.

Anne Jacqueline Hathaway is an American actress. The recipient of various accolades, including an Academy Award, a Golden Globe Award, and a Primetime Emmy Award, she was among the world’s highest-paid actresses in 2015. There’s no Catwoman without cute cat ears.

Daniel Wroughton Craig CMG is an English actor who gained international fame playing the secret agent James Bond in the film series, beginning with Casino Royale and in four further instalments, up to No Time to Die.

Even James Bond must have had to deal with bullying at pre-school.

Honestly, Emma has such a pretty face that nobody’s even looking at her ears.

Emma Charlotte Duerre Watson is an English actress and activist. Known for her roles in both blockbusters and independent films, as well as for her women’s rights work, she has received a selection of accolades, including a Young Artist Award and three MTV Movie Awards.

It’s a good thing that swimmers wear caps. Otherwise, the aerodynamics would screw Phelps over.

Actress, singer, and now a person with slightly protruded ears — Miley’s got it all!

For some reason, ladies are getting weirdly obsessed with Adam and his big everything.

Megan Denise Fox is an American actress and model. Fox made her acting debut in the family film Holiday in the Sun, which was followed by numerous supporting roles in film and television, such as the teen musical comedy Confessions of a Teenage Drama Queen, as well as a starring role in the ABC sitcom Hope & Faith.

Even though she’ll be forever known as that hot girl from Transformers, Megan does deserve some credit for staying afloat in the biz.

John Burke Krasinski is an American actor and filmmaker. He has won many awards including two Screen Actors Guild Awards and has received four nominations for Primetime Emmy Award.

After the huge success of Quiet Place, John’s got a lot more popular in Hollywood. Not that his role of Jim was anything to sneeze at.

Olivia Wilde is an American actress and filmmaker. She played Remy “Thirteen” Hadley on the medical-drama television series House, and appeared in the films Tron: Legacy, Cowboys & Aliens, The Incredible Burt Wonderstone, and The Lazarus Effect.

Olivia is a full-time director and producer these days, so we rarely get to see her lovely face on the screen.

Where even is NPH now? It’s like he’d disappeared after Netflix’s A series of Unfortunate Events.

Neil Patrick Harris is an American actor, singer, writer, producer, and television host. Primarily known for his comedic television roles and dramatic and musical stage roles, he has received multiple

Can you believe Nat is coming back to MCU after everything she said? Yikes, lady. I guess money is money, but I’d be down for a recast.

Natalie Portman is an Israeli-born American actress. She has had an extensive career in film since her teenage years and starred in various blockbusters and independent films, receiving multiple accolades such as an Academy Award, a British Academy Film Award, and a Screen Actors Guild Award.

And finally, last but not the least is Channing Tatum, on 14 position among the famous actors with big ears. Channing got an uncredited role in Free Guy. Why was he not credited?

Channing Matthew Tatum is an American actor. Tatum made his film debut in the drama Coach Carter, and had his breakthrough role in the 2006 dance film Step Up.

Thanks for reading our article on the Actors with big ears, we hope you like it. Kindly share with friends.