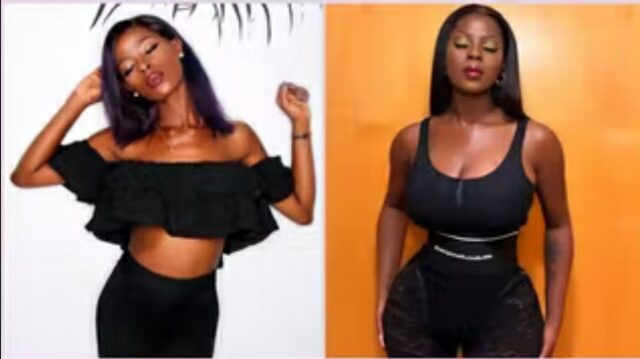 Getting plastic surgery or even admitting to having work done on your body in Nigeria was once frowned upon.

Perhaps she did it to avoid having her curves labelled false or to avoid the stigma of being teased or dragged. The stories, however, are evolving as more Nigerian celebrities have cosmetic surgery to achieve rock-hard bodies.

One of the numerous famous people that has undergone plastic surgery is Koko by Khloe.

Khloe’s dramatic physique makeover stunned everyone considering how tiny and straight she was at first. Later, she confirmed rumors that she will undergo surgery.

Before and after her liposuction of Koko by Khloe.

Following the public appearance of a video of Khloe performing liposuction, Khloe acknowledged having had plastic surgery.

The BBNaija housemate shared a selfie on Instagram after previously refuting allegations that she had undergone surgery.

She included a captioned photo of her voluminous posterior in her post.

“Straight from Boya, good night. Kidbro holding the camera (sorry, I provided the unedited version; being plastic, my photos ought to be taken directly from a camcorder) “. She wrote

Khloe abandoned her followers in obscurity by withholding the name of the physician who gave her the new hourglass form.

Later, Kayamata CEO Jaruma was unable to contain her growing curiosity. She stated in an online post,

What surgeon performed Koko’s body, please? Although Koko acknowledged getting surgery, she never labeled or referenced her plastic surgeon. I’ve seen a lot of bodies, but Koko’s doctor performed the greatest, in my opinion!

She was so thin that he advised her to gain weight before the surgery, and he did an excellent job of it. Dr. Jaruma advised me to reduce weight before having plastic surgery because I had been fat for two years.

Khloe replied and told Jaruma to stay out of her affairs. The former BB Naija contestant has kept showing off her newly developed physique.

The Bayelsa native with fair skin is well-known for the love triangle she created with Ozo on the BBN reality series.

The ex-housemate who’s backside had everyone drooling admitted she underwent liposuction to make her butt bigger.

Last October, Nengi admitted to Ozo that she underwent the procedure because she felt uneasy about her large tummy.

“I’ve always wanted surgery since I thought my stomach was quite large.

“I merely had the fat on my stomach removed during liposuction. If you can modify anything and you’re not sure about it, I believe you should.

It was quite distressing for me to have to wear a waist trainer all the time.

The reality TV contestant admitted that her one regret is that she did not blog about her surgery.

Nengi experienced a lot of online criticism once it was revealed that she had liposuction.

The former beauty queen claimed she didn’t give a damn and even encouraged ladies to alter their physical features if they so desired.

She added that the stigma associated with plastic bodies has ended.

On June 2, 2020, reality-TV actress Nina Ivy posted a picture of her with her plastic surgeon.

After she signed on to represent the natural body enhancement herbal business Mav Herbals, the photo sparked debate online.

Nina nevertheless decided to have cosmetic surgery. The company called her out and requested that she provide a public apology and refund of the money.

When the brand applauded, Nina said, “Before signing the deal, I had notified my then-manager, Femi, of Wynerz Talent, that I was scheduled to have surgery.

I had definitely informed the CEO of Mav Herbals that I was undergoing surgery when Femi arrived with the company’s proposal.

After having plastic surgery, Nina proclaimed that she felt more comfortable with her figure.

Nina Ivy claimed that she has always desired surgery as a confidence booster.

“This was the ideal opportunity for me to make the changes I’ve always wanted to make to my body, especially following the birth of my child. I feel wonderful and have grown to love my body more since I made that choice. With some ensembles, I’ve always had to wear body shapers, but not anymore.

My suggestion to those who make fun of famous people who get cosmetic surgery is to focus their energies on things that will help them and let other people live their lives.

In an interview, the reality personality told Saturday Beats. In Florida, where she resides with her child and husband, Nina underwent surgery.

Initially, Mercy, who was deadly curvy and stunning, denied rumors that her butt had been surgically altered.

However, the reality star shared her thoughts on cosmetic surgery in a recent Mercy & Ike episode.

“I don’t mind if people think my physique is made of silicon. They are so illiterate that they are unable to distinguish between liposuction and silicon.

I don’t let that affect me because I can still improve my body if I want to. Even considering touching my lips to increase their size

In response to the aforementioned statement, the influencer published a video roughly three days ago promoting significant Black Friday discounts.

It was clear from the footage that the reality star touched her face. Fans frequently questioned Mercy Eke about what she had done to her face as they scrolled through the comments.

Tonto Dikeh, a Nigerian actress, has never disputed having surgery. The beauty influencer never failed to involve the audience in her journey of bodily transformation while wearing her heart on her sleeve.

The Nollywood actress shocked the world in 2017 when she shared a video of her procedure.

The video was previously posted on Linda Ikeji TV as a part of her futile reality TV program.

Tonto Dikeh claimed in a BBC interview that she underwent a number of surgeries to get her hourglass shape.

The actress said that she didn’t like her original body type. The mother of one replied that she had lost track of the number of operations she had undergone but that she would be having her third one soon.

“I’m not sure; I’m not able to say how many. Possibly, I’ll try for a third. I also want to touch up my belly and retouch my breasts.

Ini Edo, a Nollywood actress, is hardly an exception to the trend of famous people who have had work done on their bodies.

Ini Edo was accused of having plastic surgery after she released a photo of herself in 2019. Many claimed that she appeared phony and that a procedure had gone badly.

The exaggerated appearance of Ini Edo’s waist was eventually fixed by the 37-year-old. There are subtle rumors that she underwent breast augmentation and liposuction.

Toke Makinwa, a well-known OAP and social media influencer, has a stunning physique. She has, however, also undergone a well-known surgical body enlargement procedure.

The 40-year-old media star shared her experience with cosmetic surgery in a Toke Moments episode on YouTube.

Yes, I worked out, but my breasts are natural, she said. In order to launch my lipstick line, I got a lip filler, but I no longer feel the need for one.

Additionally, I improved my physique after having my fibroids removed. I took that action because I wanted to look better dressed.

Because it’s the best thing I’ve ever done and because I wanted to look curvaceous, I don’t regret having my body altered.

Since her surgeries, the curvy Toke Makinwa has not yet expressed any regrets.

Maje Ayida and Toke Makinwa were wed for three years before getting divorced.