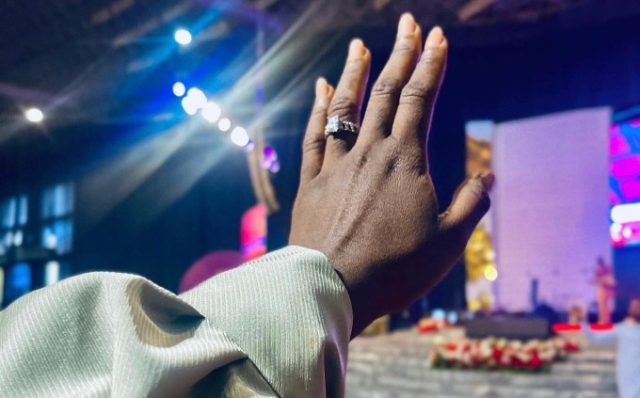 I’m sure most of you have seen the viral photos of Frank Edwards and Deborah Enenche on social media with the caption ‘Frank Edwards have finally snatched Barr Deborah Enenche” well, stay right here with us as we’ll be sharing with you everything we know about that gist.

On Sunday, October 1st, 2022, Deborah Paul Enenche posted a picture of her beautiful ring on her Facebook and Instagram handles. Then she closed the comments section and left everyone guessing. See post below 👇

Majority of her fans took the post serious and started posting it on their social media platforms. Meanwhile, nairadiary had posted referenced one comment on Facebook that got it’s attention about the gist.

The person said she’s been wearing the ring for a long time and that it was given to her by her father as a purity ring and that she is engaged to Jesus. Though this sounds interesting, it cannot be entirely true, and here is the reason.

Yes, we have been seeing an engagement ring on her finger for some time now, however, this is the first time she’s flaunting it this way. And this is obviously her way of making it known to the public that she is taken. Meanwhile, some blogs took the article that Deborah Paul Enenche was engaged to Minister Frank Edwards and that her fans started sharing the post and congratulating her.

See the post about Frank Edward and Deborah Enenche’s engagement below;

Naira Diary reached out to her for clarity purposes andh she replied. See parts of her chat with Naira Diary below

Sooner or later, they will all reveal who they are dating to the general public but in the meantime just relax with insidegistblog.

We’ll update this post as soon as we get legit information about her relationship life here. Bookmark this page so you won’t miss out on the follow up gist.

Drop your comments below 👇