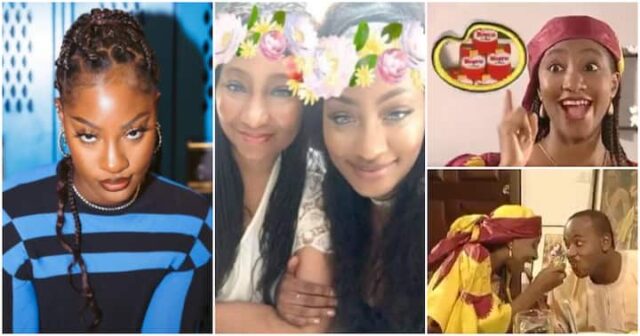 Welcome to insidegistblog ❤️ today we’ll be telling you so many interesting things about Tems, her Mum, family and Biography. We also wrote 11 interesting facts about this globally recognized sensation at the tail end of this post. So don’t be in a rush to go, enjoy your day with us.

The family of globally recognised Nigerian singer Tems recently became the topic of discussion on social media after her old tweets resurfaced. It all started with a tweet posted in 2017 by one Dr_Yazzy. The young man had shared a video of an old Royco advert from the 90s as he noted that people who remember it should be married by now.

Tems later replied to the post in 2018 and noted that it was her mother in the popular advertisement.

The songstress gushed over her mother and noted that it felt unreal to see her mother that way.

Internet users react to resurfaced tweet of Tems’ mother in old Royco advert Interestingly, the old tweets resurfaced online and it gained a lot of traction and raised comments from Nigerians. A number of fans were impressed to know that their favorite artiste’s mother was a part of their childhood due to the popularity of the commercial.

See another old photo of Tems with her mother and brother below:

Tems, full name, Temilade Openiyi is actually of British descent. Her father is British. And in proper British fashion, Tems is a huge fan of tea.

2. Her parents are separated

Tems’ parents separated when she was only five years old and so she was brought up mainly by her mom.

3. She and her mum are really close

Tems doesn’t play when it comes to her mother. She and her mum are really close so much so that on Tems’ debut EP, ‘For Broken Ears’, her mother’s voice occupies the entirety of track 4 – Temilade Interlude. Also, on mother’s day Tems took the time out to wish her mom a happy mother’s day writing:

Happy Birthday to my beautiful mum, I’m so blessed to have you, Thank you for all you do for me and for always believing in me. Wishing many many more years of prosperity. Love you with all my heart ❤️. #mamasday

4. She was featured on Soundcloud’s Artist To Watch

In April, international conglomerate Soundcloud picked Tems as one of their artists to watch. This is not the first time she’s been on an artist to watch list, she’s also been on Pulse, Complex, The Guardian and more’s Artist to Watch lists.

In her interview with Soundcloud, when asked what a fun fact of her was, Tems said that she’s “a part-time doctor”

6. No, she didn’t study medicine

What makes the above fun fact truly random is that upon first read, one would conclude that maybe she studied medicine in school. No she did not. She attended Dowen College in Lekki and studied and graduated in Economics in Johannesburg.

Tems is a lover of anime. She revealed that her top three Anime shows are: ‘Attack on Titan’, ‘Darker Than Black’, and ‘Demon Slayer’.

In addition to writing and singing her songs, Tems also produces her own music which is a very rare thing to see in the music industry.

She also added:I’m not dating, period. I’m enjoying myself so much. Currently I’m not trying to date at all.

Because of her public image and brand, Tems’ pictures are mostly moody with not a lot of smiling going on. However in her personal life, she actually smiles A LOT and she has quite the beautiful smile