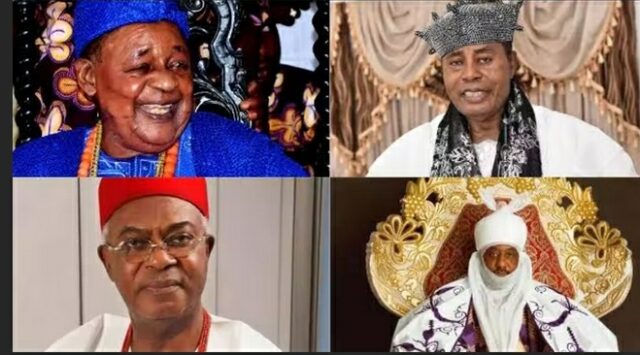 As many kingdoms bend to honor their rulers, Nigeria’s monarchy system continues to be highly appreciated. We’re going to look at the top 10 richest kings in Nigeria because that country has many wealthy rulers.

In Nigeria, kings are responsible for leading exemplary lives and making sure that their persona accurately reflects the nation, culture, and people they rule.

Nigeria was once the site of numerous kingdoms, and as a result, the people of the country hold many of its powerful kings in high regard.

Don’t be shocked if you see any of these royalty arriving at special events in a caravan of pricey vehicles. The majority of them are affluent kings because they have accumulated wealth over time.

Have you ever wondered who Nigeria’s wealthiest rulers are? Let’s look at the top ten Nigerian rulers in terms of wealth.

Oba Obateru Akinrutan, the Olugbo of Ugbo in the Yoruba monarchy, is the richest king in Nigeria.

The richest king in Nigeria is Oba Obateru Akinrutan, the Olugbo of Ugbo in the Yoruba kingdom.

The head and traditional ruler of Ugbo in Ondo State is Oba Obateru Akinruntan. Oba Akinruntan is not only a traditional leader; he is also a successful businessman. He is the proprietor of Obat Petroleum, one of the biggest privately owned oil trading firms in Nigeria.

The Olugbo of Ugbo, the wealthiest king in Nigeria, owns and rides a Bentley Mulsanne (2014 model) worth over N100 million, as well as a 2012 Rolls-Royce that has been customized to the Queen of England’s standards.

The Olugbo of Ugbo kingdom, who we rank as Nigeria’s richest monarch, has an estimated net worth of $300 million, according to the Forbes list (N117 billion).

As a result, he is ranked #1 among Nigeria’s top 10 richest rulers.

The Sultan of Sokoto, Sa’adu Abubakar, is the second-richest royal in Nigeria.

The Sultan of Sokoto, Sa’adu Abubakar, is the second-richest royal in Nigeria.

Sa’adu Abubakar is the most prominent traditional leader in the north and the spiritual leader of the Muslims in Nigeria because he preside over the Sokoto Caliphate.

The second-richest king in Nigeria, Sa’adu Abubakar, is also the co-chairman of the Nigerian Council of Traditional Rulers. He is the Sultan of Sokoto. He succeeded his predecessor, Sultan Miccado, to the throne in 2016 and is the 20th Sultan of Sokoto.

The Sultan of Sokoto, Sa’adu Abubakar, is the only owner of a fleet of vehicles. However, his Rolls-Royce is the most impressive (2017 model).

Net Worth of Sa’adu Abubakar

The Sultan of Sokoto is thought to be worth $100 million (N39 billion). On this list of the top 10 richest kings in Nigeria, his net worth places him high.

Lamido Sanusi The third-richest king in Nigeria is Sanusi.

The former Emir of Kano, Lamido Sanusi Lamido, is well-known to almost everyone in Nigeria. He served as the Nigerian Central Bank’s governor.

He gained fame, fortune, and influence on a national and international scale simply by holding the office of governor of CBN. He has a sizable net worth and has made numerous investments.

According to his net worth, he is one of the richest kings in Nigeria. Time Magazine had listed him as one of the most influential people.

Sanusi Lamido Sanusi, the former Emir of Kano, was the second-most powerful ruler in the north after the Sultan of Sokoto despite being regularly attacked by Ganduje, the governor of Kano state.

He believes that with an annual salary of N14 million while he was emir, he could afford luxury cars and even boast of owning fleets of vehicles.

He recently bought a brand-new Rolls-Royce, which caused a lot of attention in Nigeria because it is an expensive vehicle.

Sanusi also has a 1952 Rolls-Royce Silver Wraith ALW 11, an inherited vehicle passed down from the line of Emirs of Kano, in addition to the modern model Rolls-Royce.

The wealth of Sanusi Lamido Sanusi

The former Emir and business magnate is thought to be worth USD 80 million (N31.2 billion).

In Yoruba territory, Oba Adeyeye Ogunwusi Enitan is a very powerful monarch. You must treat him with respect when speaking to him.

In addition to his position of authority and dominance within Yoruba territory, the Ooni is regarded as one of the most revered monarchs worldwide.

Oba Adeyeye Ogunwusi Enitan is a member of the royal family as well as the Chancellor of the University of Nigeria in Nsukka and a real estate businessman.

The Ooni of Ife has a variety of vehicles, many of which are pricey foreign models. His Rolls-Royce Phantom is one of the most opulent vehicles in his collection (2011 model).

He also owns two Bentleys, a Mercedes-Benz S550, and a Rolls-Royce.

The Ooni of Ife, Oba Adeyeye Ogunwusi Enitan, is one of the top 10 richest kings in Nigeria with a net worth of over 70 million USD (N27.3 billion).

The Oba of Benin, Oba Ewuare II Ogidigan, is the fifth-richest king in Nigeria.

The fifth-richest king in Nigeria, Oba Ewuare II Ogidigan is the traditional head of state of the Benin Kingdom. He has a great deal of authority, power, and influence.

Oba Ewuare II Ogidigan is a graduate of Rutgers University Graduate School in New Jersey, USA, and the University of Wales, UK, with degrees in economics and public administration, respectively.

The ambassador of Nigeria to several other countries is also the Oba of Benin. He resides in a stunning palace that was constructed to royal standards of the highest caliber. The 40th monarch of the Benin Kingdom is known as Oba Ewuare II Ogidigan.

The Oba of Benin possesses a Rolls-Royce Phantom (2016 model), which is valued about N150 million in addition to his other vehicles.

One of Nigeria’s top 10 wealthiest rulers, Oba Ewuare II Ogidigan has a net worth of roughly $60 million USD (N23.5 billion).

Nnaemeka The Obi of Onitsha, Alfred Ugochukwu Achebe, is notable as being Nigeria’s sixth-richest king.

Nnaemeka The Obi of Onitsha and sixth richest king in Nigeria is Alfred Ugochukwu Achebe. He is without a doubt one of the most well-known kings in the eastern region of Nigeria.

This king has established himself both in the royal and business worlds. He was once the Chancellor of Ahmadu Bello University, Zaria, and served as executive director at Shell Petroleum Development Company.

The Oba of Onitsha, Nnaemeka Alfred Ugochukwu Achebe, is one of Nigeria’s wealthiest monarchs. One of his top vehicles is a 2016 Rolls-Royce, which costs no less than 100m.

One of Nigeria’s top 10 richest kings, The Obi of Onitsha, is estimated to be worth 50 million USD (N19.5 billion).
Oyo’s Alaafin, Oba Lamidi Adeyemi, is number seven.

The Alaafin has a lavish lifestyle and is renowned for having numerous attractive wives. Over 200 buildings make up the Alaafin’s palace, which both foreign and local specialists have designated as a historical monument.

Oba Lamidi Adeyemi enjoys driving SUVs. Among other vehicles, he has a stretched limousine, a Lexus GX 470, and a Toyota Land Cruiser.

The estimated net worth of Oba Lamidi Adeyemi is 40 million USD (N15.6 billion). As a result, he was listed among Nigeria’s top 10 richest rulers.

Babatunde Oba The Oba of Lagos, Aremu Akiolu, is the eighth-richest ruler in Nigeria.

In Nigeria, Oba Babatunde Aremu Akiolu is the eighth wealthiest ruler. He is the Oba of Lagos and one of the important traditional leaders in Nigeria. He is undoubtedly one of Nigeria’s wealthiest kings.

Before ascending, the affluent king earned his LL.B. from the University of Lagos and had spent 32 years as a member of the Nigerian Police Force.

The Oba of Lagos’s palace alone is valued up to 2 billion naira. The king himself is in possession of a substantial fortune.

One of the top vehicles in this Lagos state monarch’s garage is a 2016 Mercedes-Benz S550 with a price tag of more than N34 million.

9. The Orlu of Warri, Godfrey Emiko

The Orlu of Warri, Godfrey Emiko, is included in the top 10 richest kings in Nigeria.

The Orlu of Warri, Godfrey Emiko, is Nigeria’s seventh wealthiest king. Due to his wealth, he is considered one of Nigeria’s top 10 richest rulers.

He rules over Nigeria’s Niger-delta region and manages its oil and gas resources.

It would be accurate to say that the oil and gas industry contributes to some of this king’s wealth.

Godfrey Emiko, the Orlu of Warri, appears not to be a car enthusiast as he is rarely seen driving a premium vehicle. It is interesting to see that this king doesn’t require expensive cars to flaunt his wealth

The Orlu of Warri, one of Nigeria’s richest rulers, is thought to be worth $30 million (N11.7 billion).

The Dein of Agbor, Benjamin Ikenchuku Keagborekuzi I, is Nigeria’s ninth wealthiest monarch.

Agbor in Delta state has a traditional leader in Benjamin Ikenchuku Keagborekuzi. When he was just two years old, after the passing of his father, he was crowned king. His name was thus added to the Guinness Book of Records as the youngest monarch.

He obtained a number of diplomas and degrees in the UK, and after his return, he was named the Chancellor of the University of Ilorin. He was named the university’s youngest chancellor.

This Agbor royal leader has been seen driving a 2015 Mercedes Benz S550 Maybach, which is plain black and costs about N65 million.

The Dein of Agbor, Benjamin Ikenchuku Keagborekuzi I, is one of the top 10 richest kings in Nigeria with an estimated wealth of $10 million (N3.9 billion).

Before Dangote: Nigeria’s richest men of the 60s, net worth, income source

GO NAKED! Here Are Places Around The World Where You Are Not Allowed To Wear Clothes

The Cultural History Of Waist Beads

The history of the Ojuelegba area in Lagos